The One Win Season: How Much Of The Failure Falls On Dan Campbell? 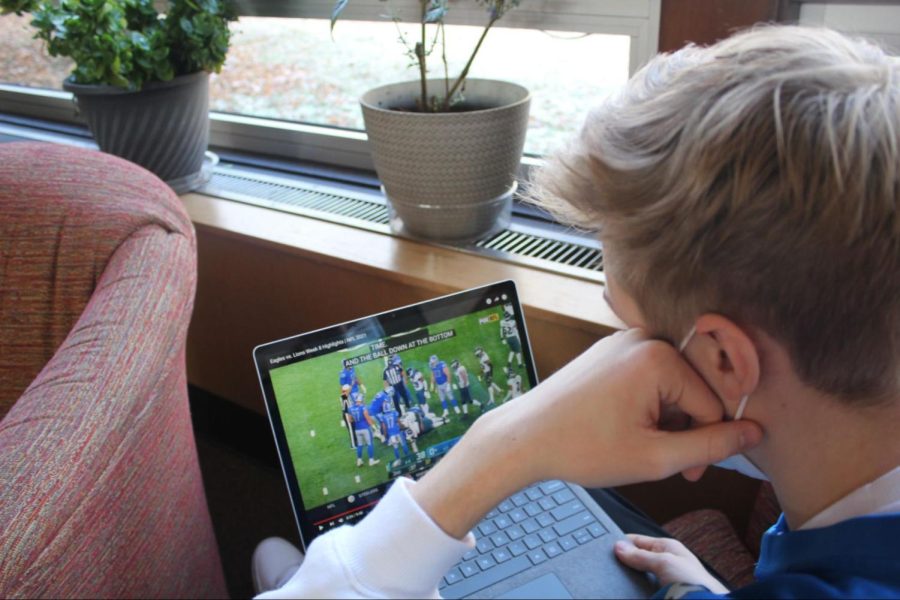 DHS junior Aidan Oakley sits down in the media center to watch the highlights of a recent Lions game where they trail the Eagles 34-0 on Dec. 9, 2021. Oakley is a big fan of the Detroit Lions and has been extremely disappointed with how the team has been performing under their new coaching staff.

After passing the halfway mark of the season with a record of 1-10-1 (as of Dec. 6), there is some concern that first-year head coach Dan Campbell and first-year General Manager Brad Holmes are not the answer to the Lions’ deep-rooted failures as an organization. Fans are becoming extremely worried as Campbell and Holmes were expected to be the front office duo that would change the culture of the team. Meanwhile, the one win as a result of 12 games played this season has provided a logical reason for many Lions fans to give up on the new coaching staff altogether.

Especially for older fans that have memories of getting their hopes up every year, Campbell and Holmes seem like every other coaching staff that has crushed the dreams of many fans. To the experienced fans, it seems like the usual cycle: fire your existing failing coaching staff, get a new set of staff, see the media hype them up, watch the team struggle, and repeat. Why does this seem to happen non-stop? The questions are tough but they need to be answered. Has Campbell improved the team in any significant way? What does he need to do to keep his job? What happens if they find a way to win some games?

When asked if Campbell has improved the team in any significant way, Lions fans who pay attention to the team should notice one thing. The NFL Draft is one area that Campbell and Holmes have had evident success in. It is extremely rare to see so many players contributing in just their first season in the NFL, and there is nobody to credit this to other than Campbell and Holmes.

Despite getting off to a tough start, the seventh overall pick and Dan Campbell’s first-ever draft selection, Penei Sewell, has been making his name known as a future star at the tackle position. Pro Football Focus, one of the most credible NFL analytics sites, has Sewell as a top 15 rookie in this draft class from their analysis of the games played so far. On November 14, 2021, Sewell let the country know of his talents after he pitched a shutout game against Steelers edge rusher T.J. Watt, one of the best players at his position. This means Sewell allowed no sacks, no QB hits, not even a hurry. With a talent as special as Sewell at the tackle position, Lions fans should be excited to see their quarterback have lots of time to get the ball down the field in the future.

On top of this, mid-round players drafted by Holmes and Campbell have been able to carve out vital roles throughout the season. Levi Onwuzurike, the Lions’ second-round draft pick, and Alim McNeill, the Lions’ third-round draft pick have been present on the field more often than expected. Onwuzurike has been in for 33 percent of defensive snaps while McNeill has played on 38 percent of defensive snaps so far this season. For playing a position on the defensive line where players are swapped out routinely, 33 and 38 percent suggests that the pair of players have played a viable part on the defense. Even fourth-round pick Amon-Ra St. Brown has been able to put up 438 receiving yards through nine games, this is incredible considering fourth-round picks are hardly supposed to see the field in their first season. St. Brown most recently recorded a last-second touchdown against the Vikings to give the Lions their first win. Special moments like that go a long way towards the confidence of rookies for the future. Altogether, Campbell and Holmes had a really solid draft from top to bottom. Lions fans should look forward to how the pair approaches future drafts and how new players will change the team.

Especially looking at the players brought in through the draft, fans should not jump to conclusions on Campbell and Holmes’ ability to bring in good players. After all, the team is still reeling from the Matt Patricia coaching era that lasted from 2018-2020. Together, former Lions coach Matt Patricia and former Lions general manager Bob Quinn lead the team to a record of 13-29-1 over the two and a half seasons they worked together.

The problem with the Matt Patricia era was not only that he was a flat-out bad coach, but he also did not appeal to the emotions of the players. Many players including three-time pro-bowl cornerback Darius Slay, on the Lions for seven years before being traded to the Eagles in 2020, spoke out about Patricia’s disregard for the respect and feelings of the players. According to Micheal Rothstein of ESPN, Slay recites an incident during training camp in 2018, Patricia’s first season, in which Patricia disrespected a social media post of his, using a vulgar term that upset Slay. “I’m like, ‘Hold up.’ Where I’m from, that don’t fly. Cause I wouldn’t say that to him,” Slay said. “If he wasn’t coaching me, I don’t want to hear too much on what you got to say. So if you’re not trying to help me build my game up to help me become a better player for this team, I don’t want to hear it.”

Slay’s comments about having a coach like Patricia that doesn’t appeal to players’ emotions display the limitations of a football team as a result. When a coaches’ behavior disgusts players to where they don’t want to talk to them outside of football, that is a problem. A coach can possess an advanced football mind, but in the end, if the team’s most important players are not invested in playing their hearts out for the team, it becomes extremely difficult to find any type of success in the competitive NFL. Patricia’s disaster of a team as a result of his negativity towards the players should highlight the upside of Dan Campbell’s coaching style and how it will change the culture of the Lions.

There have been numerous examples of Campbell’s charismatic nature and the fans seem to love it. Also, one could argue that Campbell is starting to make a positive impact on the whole organization. The urge to fight no matter how bad the score gets not only provides the chance for the Lions to come away with some unimaginable wins, but it also provides hope that this fight can take this team to new heights with a better roster. One early example of the Lions’ grit and grind mentality was displayed during the first game of Dan Campbell’s coaching in Detroit against the 49ers. After being down 38-10 in the third quarter, the Lions kept fighting and brought the final score to a more appealing 41-33. They even possessed the ball near the end, almost tying the game and making a 28 point comeback. The fight and soul of this football team was evident during the comeback and it seems to be very encouraging.

Despite these uplifting signs, we cannot ignore the blowout losses and the awful record on the season. So what does Campbell need to make happen in order to keep his job for next season? With the habit of losing for decades, when a Detroit Lions coach doesn’t cause any sort of noticeable improvement, more pressure starts falling on that regime compared to teams that have experience with winning. The Steelers, who are tied for the most Super Bowl wins with six of them, have only had three coaches since 1969. Meanwhile, the Lions have had three coaches since just 2017. This suggests a problem with the mindset of the Lions organization. Coaches need more time to build their vision of the team. At this point what do we have to lose as fans? Rod Marinelli coached for three years until 2008. Jim Schwartz coached for five years until 2013. Jim Caldwell coached for four years until 2017. Patricia coached for three years until 2020.

Do we want to continue this streak of firing coaches after inheriting a new team for a few years? This tactic is obviously not working, so why should we keep trying our luck? Many Detroit fans feel the same in their regret of firing Jim Caldwell, the coach of the Lions from 2014 to 2017. Caldwell had an overall record of 36-28 during those four years. The problem was that Caldwell never put together a great season, the Lions always seemed to just miss the playoffs besides his first year where the team went 11-5. But why is there a rush to fire a coach when they aren’t doing incredible? Caldwell had a winning record during his tenure as head coach, the Lions made the mistake of not riding his success into the future. Instead, the organization fired the one beacon of hope and settled for a string of failing coaches.

Maybe keeping coaches for a longer tenure should start with Campbell. Many coaches have struggled their first season. For some, not as much as Campbell, but they have gone from virtually nothing to leading their team to new heights. For example, Kyle Shanahan, 49ers head coach, went from having a 10-22 record during his first two seasons to leading his team to the Super Bowl in his third year. Current head coach of the Buffalo Bills, Sean McDermott, went 15-17 in his first two seasons compared to 23-9 in his next two seasons.

If the Lions finish the year with one win, criticism should fall on Campbell and Holmes, but let’s not jump to conclusions quite yet. It has been an awful year, but we have seen rookies that have made an impact, we have seen a fight from this team that has not been present in previous seasons, and overall we can tell that Dan Campbell truly cares. Campbell has the ability to pull out a couple more wins, which he would need to do in order to keep his job for the next season. But as for now, let’s give Campbell a chance. His success in other areas compared to previous Lions coaches suggests that there could be a change in the culture of this team. After all, we know Campbell loves the city that he played and now coaches for.