A Master’s Degree in Learning 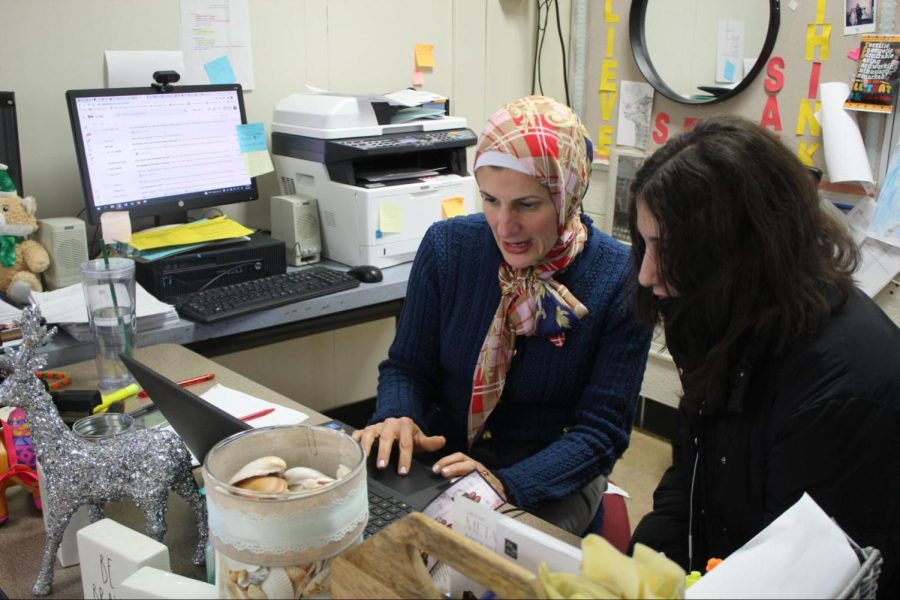 Fatme Houry showing DHS freshman Yara Hamam her grades on March 3, 2022. Hamam says she favors Houry’s teaching style. “I like the way she teaches us,” Hamam said. “It really helps me understand on what she’s teaching us.”

The process of learning is different for everyone. Some people want to excel in academics, work towards bettering their understanding of emotions, or maybe they want to have more appreciation for the world around them. DHS ELA teacher Fatme Houry is someone who has gained a better perspective of life through her commitment and diligence through learning it all.

Houry is a new teacher at DHS tackling ninth grade ELA for the 2021-2022 school year after having taught the past three years at Bryant Middle School. Due to many DHS students having gone to Bryant, Houry was loved from the day she started working in the building. This is her twentieth year teaching and has even taught at schools in Dubai. Before teaching, her job was in the employment department working with welfare recipients. Houry is currently a student at Concordia University working on her second master’s degree in English as a Second Language.

Houry said the reason she enjoys learning so much is due to the contentment received from gaining knowledge.

“I know that I simply enjoy learning and growing in whatever or wherever my interest is at any given moment. I also enjoy the challenge and the feeling of achievement,” Houry said. “Even now as I work on my second masters [degree], there is feeling of accomplishment every time I submit an assignment that has taken hours of thinking and hard work. The feeling never gets old.”

Houry’s husband, Marwan Houry, said that he has learned a lot from his wife’s perspective of the world.

“Mrs. Houry’s attitude to life has impacted me positively in every aspect of my life and every step of the way: the peace of mind she gives us at home, the continuous support for my personal development and career growth, and her full dedication to the success of our mutual life journey and family are my greatest catalysts for my success, and are more than I could have ever asked for,” Marwan said. “Her dedication to helping and supporting others extends her positive influence to far beyond than just the people in her immediate sphere and positively impacts the community at large.”

Seventh grade Bryant teacher and former colleague of Houry for three years, Laurie Doner, said Houry’s students have benefited greatly from having her as a teacher.

“You were always certain her students were good writers, readers, and thinkers,” Doner said. “This takes a special kind of teacher who figures out ways to reach students who are not understanding and spends time reteaching material more than once so that all students are understanding the concepts being taught.”

Houry said she uses her past experiences to improve her teaching.

“As a student, I always had someone who believed in me and continued to push me to work harder, think more, and aspire for greater things,” Houry said. “That is what I try to carry down to my students with a tough love approach.”

Houry said she has been blessed to have gained various life experiences over the years.

“One of my first jobs was in the employment department working with welfare recipients. My role was to work with them to find a job and start a path to self-sufficiency. I did this while I worked on my teaching degree,” Houry said. “This experience helped me gain a better perspective of the human condition and taught me to never take anything for granted.”

“Mrs. Houry deeply believes that she is in the right place to serve the community. She treats the students like her own kids and connects very well with the parents and families within the community,” Marwan said. “Her professional attitude, dedication and integrity are evident with her relations with the students, staff and the administration.”

Houry also applies her love for psychology to the classroom. DHS freshman Yasmeen Yaghmour said she enjoys the push Houry gives her students to dig deeper into themselves.

“I do enjoy the psychological element Mrs. Houry implements in the classroom,” Yaghmour said. “Mrs. Houry has had me think about something deep in her classroom. In her class we were talking about our flaws and traits and one that was mentioned is lacking sympathy. I tend to lack sympathy and after the class discussion we had about it I started to think about how much sympathy I lack and ways to gain it.”